When Jough and I first started dating, he decided he was going to give up alcohol and red meat for Lent. For 40 days and 40 nights, no alcohol. No red meat. It wasn’t for religious reasons, no – the damn atheist. He took this as an opportunity to better himself, to increase his well being and overall health. In solidarity I decided I was going to give up noodles. Cold turkey. It was difficult, challenging, hard, insert synonym here ____. While it was hard for Jough to give up his vices, and where he is the lover of eggs, noodles are my first love. My raison d’être.

What is a noodle?

I’m talking about the former, not the latter.

Most cultures do have a form of noodle that they claim as their own, and noodles have been a part of our culinary history for quite some time. While the term noodle does include Italian/American varieties such as spaghetti and other long tubed pasta, I favor the Asian versions more. The ramens, the udons, the sobas, the lo meins, etc.

Look at this guy go:

Aside from the versatility of the noodle (tastes, flavors, dishes), what I love most about them are the different textures associated with each kind. That gummy starchy texture as you slowly bite into an udon, or the slippery crispy smoothness of a broad noodle.

I’d also like to give a quick mention to the ever delicious all encompassing awesomeness that is noodle broth, far superior to the sauce. From the anise-flavored coco-nutty broth of a Laksa all the way to the beefy porky lemongrassy scent of Pho. Oh broth, you make noodles taste so much better.

This guy knows what I’m talking about:

Since Jough and I are eating healthier, the intake of starch and carbohydrates have fallen by the wayside, ergo noodles too. It’s definitely become an occasional delight rather than frequent, but we do travel for good noodle.

Recently we went to Yusho for their Sunday ramen lunch. This is probably one of best ramen dishes I have ever devoured. It went down fast and was extremely satisfying. The broth was rich with flavor and spice, where you could taste the intricacies of the stock that revealed subtle hints of a dashi broth, bonito flavoring, and garlic. While a bit expensive for Sunday brunch, I would go there again for the experience – and the ramen. 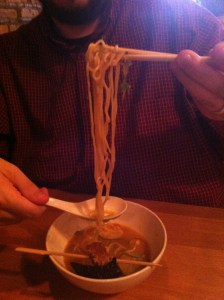 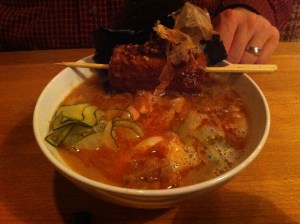 Some people might think I’m crazy for talking about Penny’s Noodles next, but I think this place does a decent job of making fresh noodle dishes. I know this isn’t a real Thai restaurant, and I wouldn’t go there for something authentic, but they put out some good tasting food. Their Hot Pepper Noodle dish is to die for. You heard me right. To-die-for. I don’t know why this recipe works for me, but it does. Maybe it’s the combination of the ingredients (wide rice noodles, egg, onions, red bell pepper, basil, and a dash of ground black pepper on top), but it works remarkable well here. Its simplicity is hard to duplicate but it is by no means a simple dish. I’ve tried to replicate it at home, but the wide Thai rice noodles (same as Pad See Ew) are hard to find outside of the restaurant business and other types of noodles won’t work as well. I guess I’ll have to continue to patronize Penny’s.

This is a fond memory: 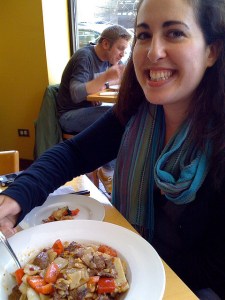 A few days ago I was able to venture over to the Slurping Turtle (finally) and try some of their ramen. It was good, but not as good as Yusho or Wasabi. 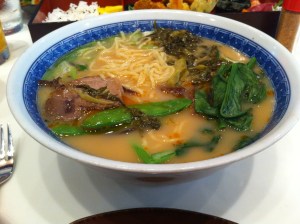 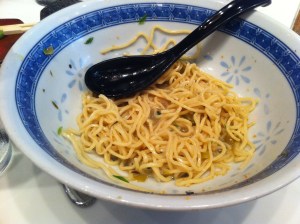 An honorable mention to the Pancit. We got this one in Hawaii (came with offal of some unidentifiable variety): 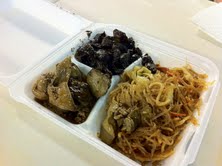 I hope this post leaves you with a taste for noodles and something wholly better than Nissin Top Ramen or Cup O Noodles.

2 thoughts on “Talking About Noodles”